An adult male elephant can drink up to 55 gallons of water in less than five minutes, and requires between 18 to 26 gallons on a daily basis to survive.

So what happens when the natural habitats elephants depend on are disrupted?

On the Indonesian island of Sumatra, 45,000 acres of natural forest were designated to the Balai Raja Wildlife Reserve back in 1986 as a way to preserve elephant habitats. Today, only 500 acres of forested land remain and the water sources the elephants and local people depend on are under threat.

Over the last thirty years, acres of the reserve have been burned and deforested, as paper and pulp plantations take over the forest. The companies have built electric fences to protect their crops, closing off access to natural elephant corridors and water sources.

As these industrial developments squeeze out natural elephant habitats, the elephants are forced to venture closer and closer to local communities in their search for water.

Ongoing conflicts – sometimes violent – between the elephants and local people who are struggling to access the one resource neither can live without, water.

For local farmers, not only is access to water becoming a bigger issue, but small crops they depend on to eat and support their families are being trampled and destroyed by the elephants. The elephants suffer as water sources are depleted, forcing more violent interactions with farmers over remaining water.

In the face of this struggle, the Rimba Satwa Foundation has rehabilitated 12 acres of natural elephant habitat to provide a corridor of food and water for the animals. With $2500 from Global Greengrants Fund, proceeds from the sale of the Light the Way candle, the Foundation planted new trees across an area that was previously burned and destroyed by a local plantation, aggravating the struggle of the elephants. A team of local citizens then planted, cared for, and monitored the growth of trees and vegetation for over 12 months.

Today, the corridor is thriving - providing food and water for the elephants, while directing them away from the community and its water sources. The number of interactions between humans and elephants has decreased. As an added bonus, beehives installed in the new corridor provide the community with a new source of income, a more sustainable one than the destructive plantations.

This project serves as a model of community conservation for other impacted areas across Sumatra and Indonesia. By providing an example of sustainable economic alternatives, such as beekeeping, other groups are following suit, moving away from burning and destroying forests for the development of plantations.

Most importantly, the success the Foundation has had confirms that locally-led community efforts can result in thriving forests to the benefit of humans and wildlife alike.

Inspired to help? Purchase a Light the Way candle this April, and support Aveda and Global Greengrants Fund in our partnership to help grassroots groups worldwide gain access to clean water. Stand Up for Clean Water 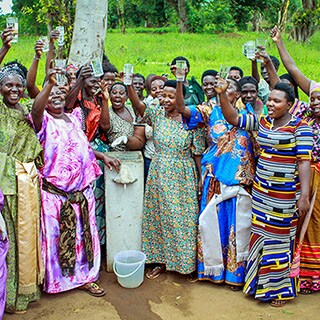 How Women Light the Way in Uganda 5 Easy Tips to Care for the Planet